The Peoples Forum for Environment and Global Justice 31 May – 1 June will provide a space for social movements and civil society organisations to interact across intertwined issues and struggles.

You can find the programme here: Peoples Forum for Environment and Global Justice

See also the Pre-June Sessions that are being organised in the lead-up to the Peoples Forum.

Go to the Peoples Forum event section with details on sessions, speakers, session organisers and more. 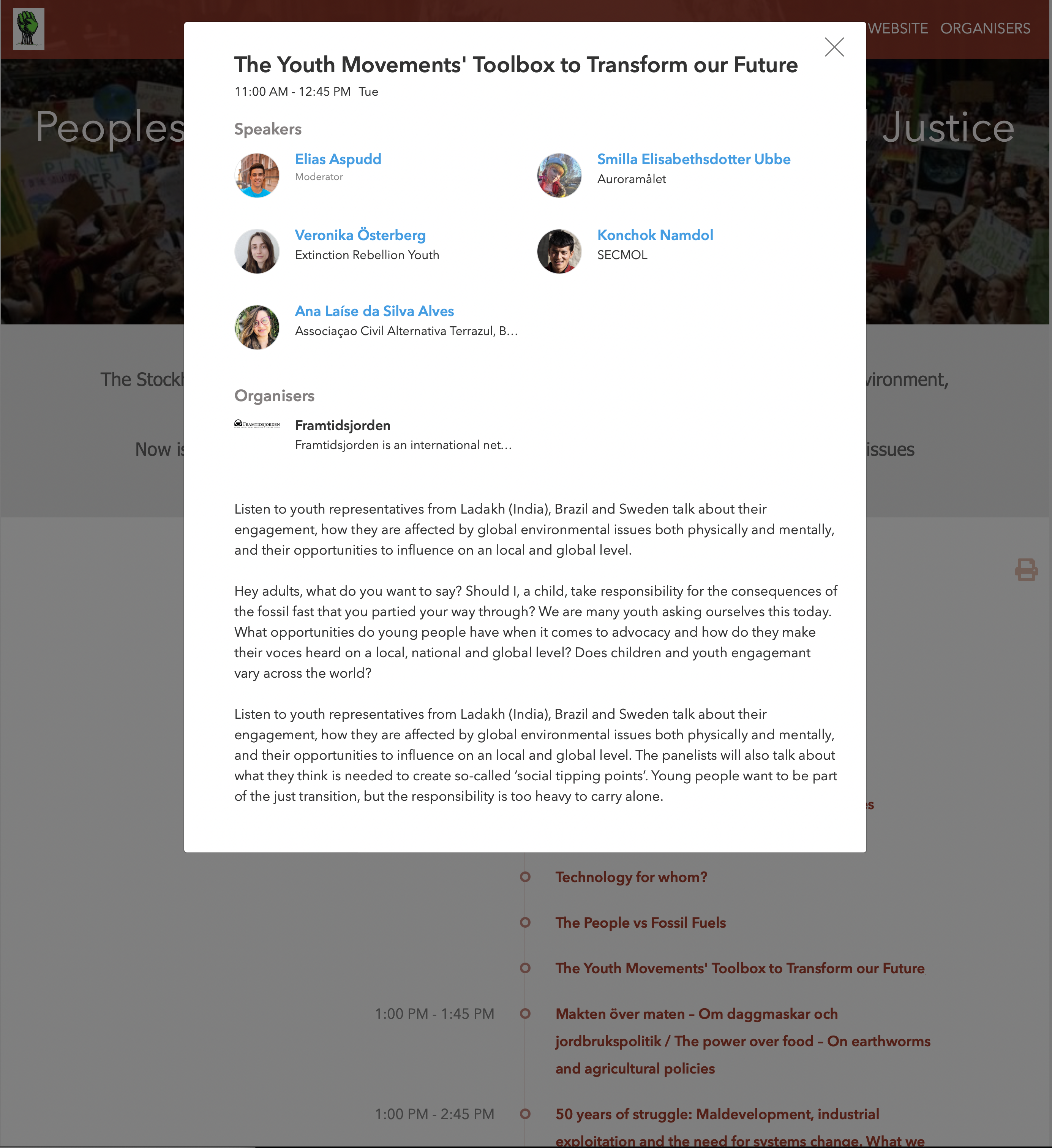 Download the overview programme here. Note that some session and times may change – check for updates! 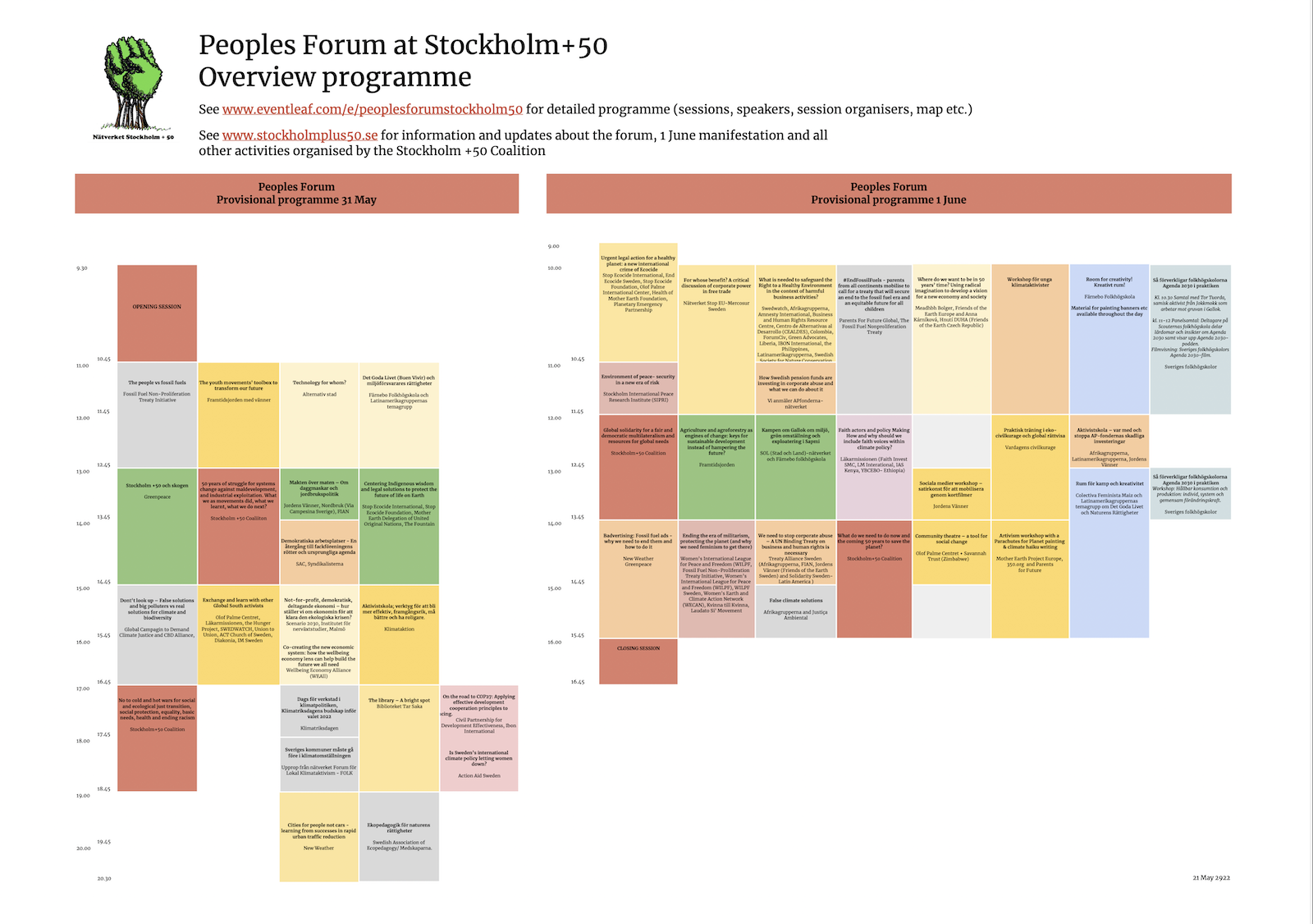 Investigative journalism. Dark side of Swedish mining and extractive industries.

The Peoples Forum will take place at ABF-huset in central Stockholm. This building has a rich history as venue for convenings of civil society, and was also the place for the original Peoples’ Summit in 1972. 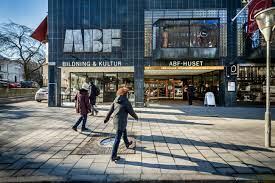 The venue has many meeting and conference rooms at different sizes, and an open space on the ground floor with café and lots of spaces for informal meetings and convenings. About 10 min walk from the main square (Sergels torg). 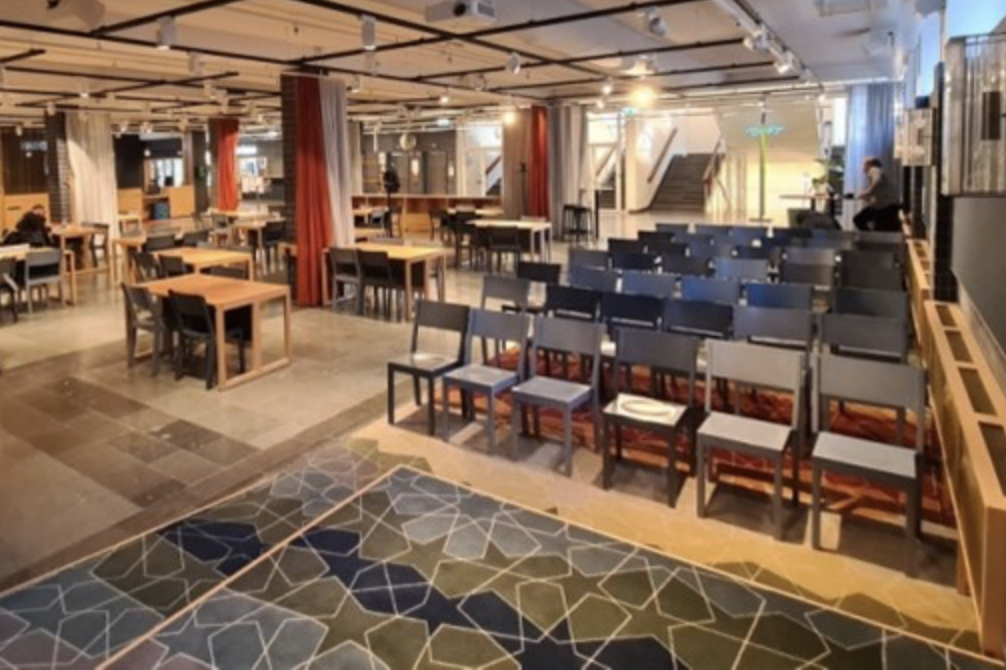 Check out this background text that sets some context for the Stockholm +50 Coalition activities. PDF-version here. You can also expand and read by clicking the banner below.

Click here for background, context and framing of the Stockholm +50 Coalition. This text is evolving and we appreciate comments and suggestions for how it can be further developed.

We are facing an unprecedented set of existential crises that threaten human societies and many of the planet’s ecosystems. In this context, we welcome the Stockholm +50 UN conference on a healthy planet with prosperity for all. We share this vision, but recognize the need to go much further than governments are ready to do.

Many human societies have been faced with overwhelming ecological, social, political, economic and war related challenges. Sometime these where possible to overcome, while other times they resulted in collapse. We have much to learn from the catastrophes and exploitations that many indigenous peoples, cultures, ethnic groups and colonized areas and discriminated groups have suffered, and are still confronting.

Humanity now faces a situation where several accelerating, destructive processes undermine the very core functions of our climate and biosphere. Uncountable ecosystems are at risk. We risk making the planet unhabitable for humans.

The impacts of the climate crisis, species extinction, arms races/militarisation and global injustices all impact people in vastly different ways. Wealthy people who have caused the problems are much less affected than those who play little or no role in creating the problems (also blatantly clear and further exacerbated by the way the Covid pandemic has been managed). This fundamental difference of responsibility and who need to be prioritized is central for how we need to tackle the global environmental and social crises.

Increased spending on militarism, arms races and lack of investments for peace to handle conflicts also lead to less resources for social and ecological transformation. We appeal to all social movements to resist destructive forces at play, and to jointly act for real solutions.

The Stockholm +50 Coalition will be organizing the Peoples Forum for Environment and Global Justice in end of May and beginning of June 2022. This Peoples Forum takes place fifty years after the first UN conference on environment and development was held in Stockholm in 1972, which was also the birthplace for the parallel civil society meetings and manifestations that have been held during UN summits ever since. Social movements with strong representation from the global south challenged, critiqued and helped broaden the discourses at the formal meeting – including emphasis on health, social rights and deeper development critique. It laid the ground for independent civil society engagement around UN meetings for half a century to come.

Sweden and Kenya co-host the this year’s formal UN Stockholm +50 conference. At the same time, social movements are planning parallel activities to highlight principles, demands and actions that respond to the depth and seriousness of the crises we are facing – with global justice and challenging of power relations at the core.

Fifty years of international negotiations show that neither states nor market mechanisms are equipped to tackle the intertwined crises we are facing. Rather, we need transformative processes through popular engagement and broad mobilization. We need a combination of resistance against dangerous distractions and false solutions, and a mobilization of people based force for change that foster existing and emerging alternatives that celebrate cultures of peace and cooperation rather than competition.

We may have different views, priorities and motivations for what is most important, and in what order we need to transform our societies. We may also have diverse views on the role and importance of states, markets, entrepreneurship, collective ownership and community power. What is key, however, is to emphasize interconnected root causes and the need for broad and deep systemic change within all societies. As in 1972, a key role of civil society is to expose how discussions and proposals among governments in the formal UN meeting are generally too shallow, and tend to maintain inherently unsustainable and unjust development models. All societies/countries need to transform – there are no “developed” countries.

We need to highlight alternative development visions that spell out real alternatives. The power of large corporations both nationally and internationally must be curbed, and the integrity of the UN system maintained. Short-term profit must be trumped by real alternatives to the current economic order based on precaution, sufficiency, justice, human rights, equality, and respect for nature.

The acute climate and environment crises require a never before seen mobilization and multilateral efforts to stop fossil fuel production and deforestation, paired with collaborative measures and repayments of climate and environmental debt to enable formerly colonized areas to transition to renewable and democratized energy systems, sustainable forestry and agroecological, regenerative food production.

We appeal to all social movements to formulate common approaches grounded in participatory democracy and rejection of all forms of undue power, vested interests and mounting inequalities. To revert current disastrous trajectories, unprecedented numbers of people fighting for their future and more just and sustainable societies need to be mobilized, spanning the very local to global levels. Rage and sorrow over irreversible destruction and threatened futures must be constructively channeled into action that confront power while embracing and celebrating shared quests for global justice, including justice between and within countries and towards future generations.

In these efforts it is important to recognize the vastly different realities faced by people in for example rural and urban areas. The increasing gaps between centre and periphery both between and within countries require resources be taken from privileged areas and militarism towards common needs so that no one is left behind. It is also necessary to deal with gender relations, colonialisim and neocolonialism, imperialism, racism and other asymmetries of power in order to form the necessary alliances to build societies shaped by non-dominance, trust and safety.

We are convinced that the primary force behind such an agenda are peoples’ movements that join struggles with others. We hope our activities around Stockholm +50 can facilitate the coming together of a diversity of movements: environmental movements that see labour rights and social justice as integral to the global climate and ecological crises, farmers and landless peoples’ movements, trade unions, community associations, movements for proper health and housing; human rights, women’s and youth rights, anticolonial and anti-imperialist movements, minority rights, economic justice, indigenous, peace, transition and many other movements. 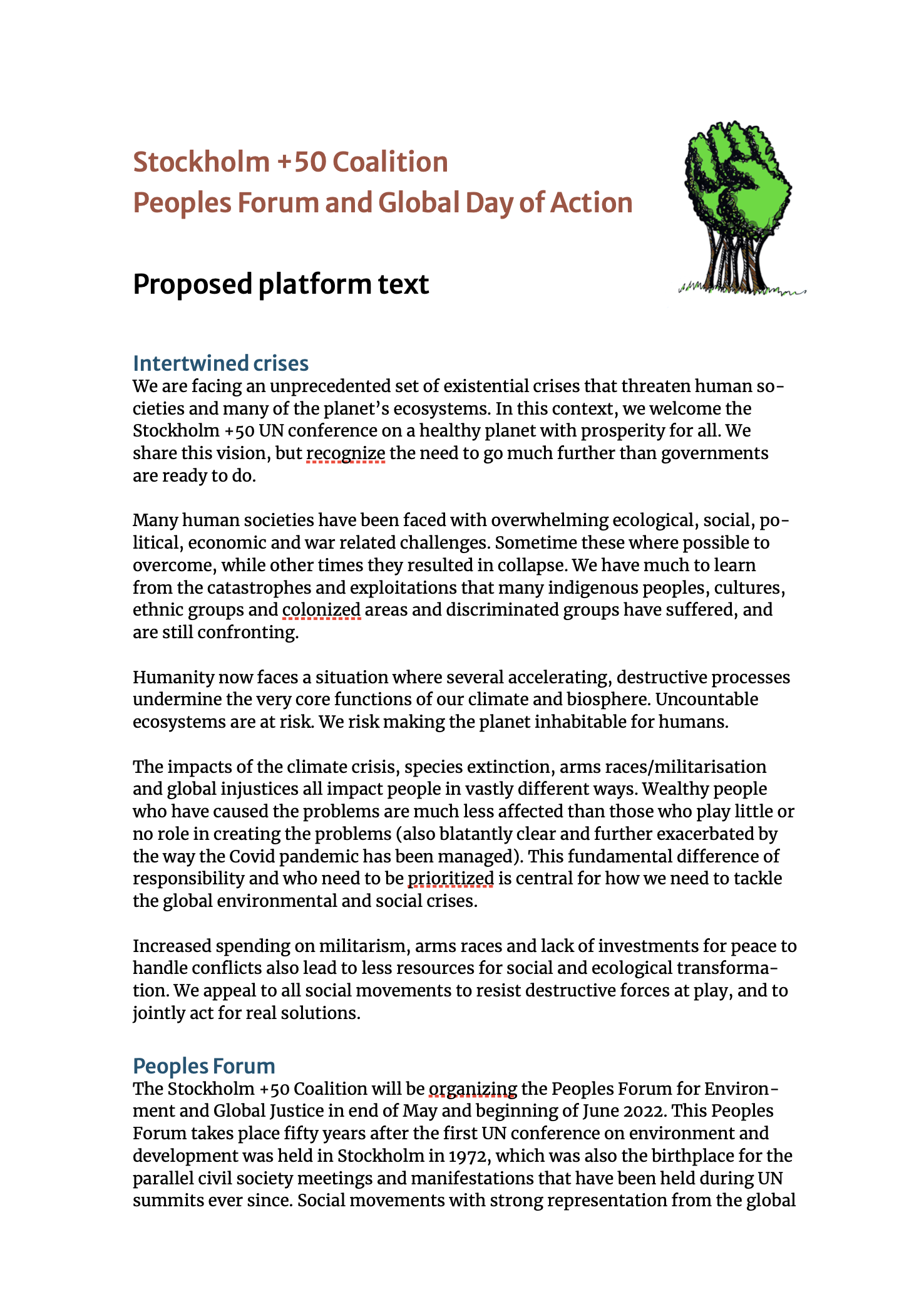